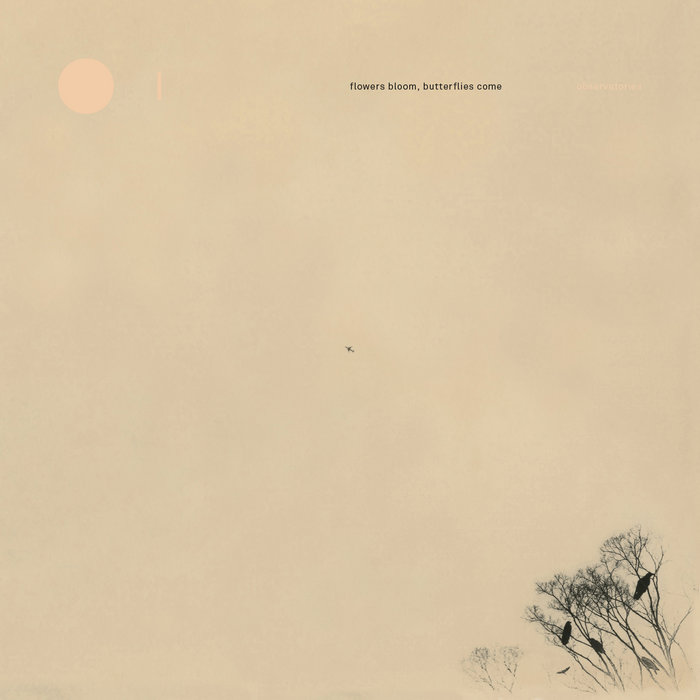 Joe Borreson it takes great skill to make dreamy quiet music like this....the kind where not much seems to happen, but that fully captivates your attention via smeared textures and looped tones. This is yet again another Humble Bee collab. I am in awe of, but the first between Craig Tattersall and Ian Hawgood (of Home Normal fame) and let's hope not the last. Full of understated warmth this is an album that leaves you in a looped saturated haze, that begs to be played on repeat. So very well done, gentleman. Favorite track: I Knew I Was Close When I Saw The Bloom Of Your Light.

The Means to an End


"Flowers Bloom, Butterflies Come" is the result of a dialog between the Japanese photographer and artist Miho Kajioka and the UK musicians and composers Ian Hawgood and Craig Tattersall initiated by IIKKI, between August 2019 and January 2021.

the complete project works in two physical imprints:
a book and a disc (vinyl/cd)
it should be experienced in different ways :
the book read alone
the disc listened to alone
the book and the disc read and listened to together.

Born in the United Kingdom, Ian Hawgood spent most of his adult life living in Japan, Italy and Poland. Currently he calls Peacehaven (on the south coast, near Brighton) his home. Since 2009, he’s well-known with his work as the curator of the Home Normal label. He makes music using an array of reel-to-reel and tape machines in his studio by the sea, where he also master works for many labels and artists alike. You could often catch him on the coast with his faithful Nagra recorder, hydrophone and field microphones. These days his focus of music is on decayed ambient works using old synths and reels mostly, alongside his childhood piano.

Miho Kajioka (b. 1973, Japan, lives in Kyoto) is an artist and a photographer since 2011. « Kajioka's artistic practice is in principal snapshot based; she carries her camera everywhere and intuitively takes photos of whatever she finds interesting. These collected images serve as the basic material for her work in the darkroom where she creates her poetic and suggestive image-objects through elaborate, alternative printing methods. Kajioka regards herself more as a painter/drawer than as a photographer. She feels that photographic techniques help her to create works that fully express her artistic vision. Her images evoke a sense of mystery in her constant search for beauty. The focused, creative and respectful way in which she uses the medium of photography to creating her works seems to fit in the tradition of Japanese art that is characterized by the specifically Japanese sense of beauty, wabi sabi. (…) According to her, photography captures moments and freezes them; printing impressions is like playing with the sense of time and getting lost in its timeline. » (Ibasho Gallery) Kajioka’s work has been exhibited in Spain, Italy, France, the Netherlands, the USA, Germany, Belgium, Portugal and the United Kingdom. Kajioka’s latest book ‘so it goes’ won Prix Nadar in October 2019.
____________________________